Young Toby Beckett had a fabulous medals weekend after participating in two different Under 15 tournaments at the weekend. 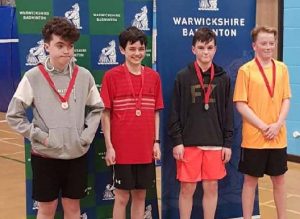 MENS SINGLES – His family ploughed through the snow to the Warwickshire Under 15 Bronze tournament. After getting out of his box and winning in the first round of the knock-out he was through to the semis. He faced his doubles partner Harry Jones. Toby pushed hard winning. Toby lost in the final giving him his first ‘medals weekend’ treasure in the form of a Silver medal.
MENS DOUBLES – Toby played with Harry, to go successfully through two knock-out rounds and saw them in the final. Tough final, but Toby and Harry took the game, giving Toby his second ‘medals weekend’ treasure a Gold medal. 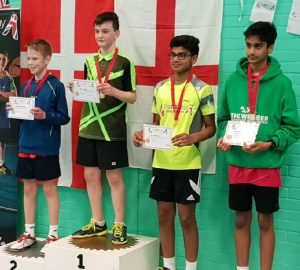 MENS SINGLES – Straight through the box, narrowly missing playing his doubles partner. Three knock out rounds to see him through to the final. Winning 21-16, giving Toby this third ‘medals weekend’ trophy with a Gold.
MENS DOUBLES – Toby and Harry got out of their box, only to meet the number one seeds and unfortunately they proved a little to strong for Toby and Harry.