Under 13 Bronze tournament March 2018 was heavily threaten by snow building up to the tournament date of 4th. The ‘siberian beast’ nearly caused a casualty. With a heavy entry of around 65 players all under 13. Bad weather was forecast but with players travelling from as far away as Cornwall, Nottinghamshire, Buckinghamshire and Yorkshire, West Midlands PC were reluctant to cancel.

Most folks set of earlier that normal to make the journey there. The a full on day of badminton was seen and all done by the time the centre close at 6.00pm. A couple of ‘Thank you’s go to Richard Jones (Connor’s dad) whos help behind the desk and keeping the score board up to day, massive help. Uma Reddy (Akash’s dad) on suttle control, keeping you guys in order and limiting the knocks. AND of course young Sam White (a PC coach), it was his first tournament behind the desk.

That aside we got through approximately 170 games yesterday without any major problems. An almost close injury, couple of scoring disputes and line call queries, but nothing major. A few tears here and there, but soon forgotten. So a relatively easy day in that respect. 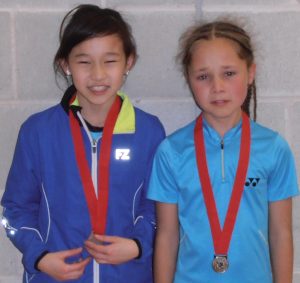 The WMPC saw the following medals for their players.
Lucca Modin – Gold – LS Plate and Silver – LD
Akash Reddy – Bronze – MS Plate
Well done to all the PC’s up and coming stars for participating in the event.

FYI – Parents. The Tournament Organisers job can be made so very difficult, IF, you don’t let them know your arrival times OR when you leave the building during a break in your play. We are always willing to help and accommodate IF we know. Communication is the key.